BPM and RPA. Two sides of the same coin?

Robotic process automation (RPA) is the latest buzzword on the horizon and is rapidly gaining traction in many organisations who want to embrace digital transformation and automate everyday tasks.

In this article, we discuss RPA and how it can work alongside Business Process Management (BPM) in an organisation’s IT strategy.

What does RPA stand for?

RPA is an emerging form of clerical process automation technology based on the notion of software robots or artificial intelligence (AI) workers (source: Wikipedia). These software ‘robots’ have been trained to perform human tasks by imitating our behaviour to undertake high-volume, manual tasks involving structured data such as data entry.

The ‘robots’ follow documented procedures to replicate human behaviour (i.e. copy/paste field data, locate data sources etc.). Defined in a script or flowchart and triggered by an event or schedule, these processes are rules-based (i.e. no human decision or interaction required) and highly customisable.

How is RPA different to BPM?

If you need to quickly automate specific tasks within existing software systems, RPA is a worthy candidate. However, if you are looking to automate the underlying business processes, BPM is your best option.

While you could use RPA to automate manual processes, it is worth considering an overhaul of your workflow (the ‘progression of steps in a process’). BPM is perfect for situations when you need to refine the overall process to increase efficiency and profitability, not the task.

Automating processes across the organisation is not always possible due to limited budgets, time and/or a lack of stakeholder buy-in. In such scenarios, automating a surface-level task with RPA may offer a quick win. In the meantime, you can investigate BPM and secure stakeholder buy-in for organisation-wide adoption of a more efficient workflow that may use better technology or processes to make the task completely obsolete.

In summary, RPA is focused on tasks, BPM is focussed on processes.

Are RPA and BPM complimentary?

We do not believe RPA solutions will replace BPM. In our opinion, RPA compliments BPM and, in many cases, if BPM has been deployed correctly there should be no need for RPA.

One of the barriers to adoption with BPM is working with internal legacy systems. Many companies are reluctant to replace or redesign existing systems due to the complexity and risk associated with the project.

Consequently, outdated software systems that do not include Application Programming Interfaces (APIs) because they were originally developed for a specific purpose are commonplace. An API allows two software applications to integrate and talk to each other, so without them it can be hard fitting an existing legacy system into a modern, integrated workflow.

RPA offers the intriguing prospect of bypassing the need for an API as it accesses computer systems through the user interface (UI) as a human would. It does not need to contact back-end databases or APIs; instead developers are able to create scripts that automate repetitive data entry tasks via the UI.

In our fictional scenario below, we have created a CapEx approval process (the sequence has been shortened for illustrative purposes). We have automated the process using BPM software but we now need to export the data from the approved CapEx request eform to a legacy finance package. This is where we can implement RPA and integrate it with BPM.

Figure 1: An example of how to use robotics in business processes: 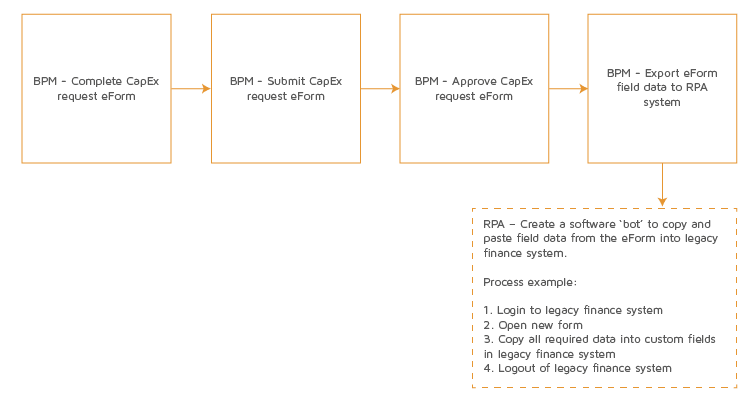 The rise of the robots. Will RPA replace humans?

Did you think of Will Smith, in the futuristic thriller iRobot, when you heard the term RPA? Or worry about RPA taking your job?

In 2015, the Bank of England warned that up to 15 million jobs in Britain, mainly in administrative and production roles, were in danger of being replaced by robots in the future as cognitive machines replaced humans to improve efficiency and save money.

Reform, an independent think tank, have claimed RPA could replace up to 90% of Government administrators in addition to thousands of jobs in the NHS by 2030. The report suggests doctors and nurses may be impacted by RPA as it can outperform humans at some diagnoses and routine surgical procedures and is more efficient at data collection.

During the 2017 General Election campaign, the Green Party proposed to take steps towards a universal basic income and a 4-day working week, partly in response to the prospect of robotics and Artificial Intelligence in the not too distant future.

In reality, we do not believe improving the automation of some legacy systems will replace humans, but it does provide a better way of completing existing tasks, freeing up time and resources for more productive jobs.

To find out more about our BPM software, including Process Director, please call 03300 100 000 or contact us.

Richard is the Marketing Manager at ePC where he is responsible for marketing, PR and ISO 9001.